Agave Variegated Victoria Reginae are stunning especially as they get larger and more mature. If you love agaves like we do, you gotta consider one of these for your collection. They definately make a statement in decorative pots, or landscaped in the ground.

People Love Our Agave Variegated Victoria Reginae! Have a Read:

It's a beautiful plant but when buying a 6" plant I didn't expect to need to downgrade it to a 4" pot because it was so small. 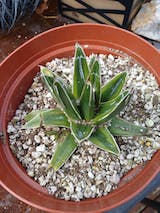 We are sorry to hear that you are disappointed in the size of the plant. The size referred to in the listing is the size of the pot, not the plant. So this is a beautiful Variegated Victoria Regina potted in a 6' pot. Succulents will grow to fit their container so if left in the 6' it pot, it would not take long for it to grow and fill that container. As you have repotted it into a 4' pot, it will only grow that big.