Gasterias are one of my  favorite succulents because they are just so darn interesting to look at and handle. They are native to South Africa and their name comes from the Latin word for “stomach”, which refers to the shape of their flowers.  Interestingly though it's their tongue like shape that many of their common names come from.

Gasterias are easy to grow and do well in pots, both indoors and outdoors. Avoid direct and sustained sunlight, shade and partial sun via a window if indoors works great.   Like all succulents, if your plant does not appear to be doing well, address it's watering, direct

Most gasterias grow during the winter when temps are cooler, opposite of most succulents which tend to grow during the warmer spring and summer months.  It's important to remember this as it could be a problem if they get too much water during our summers.  Use well draining soil, and always remember to never water when wet, only water if dry!

The easiest way to propagate gasterias is by seperating the pups that grow alongside the mother plant.  Leaf cuttings also work.  Experiment!

The main issue that can effect the appearance of Gasterias are the black spot fungus that can appear out of nowhere and for no known reason.  It's not lethal, but it can effect the appearance of it's leaves.   Sometimes we get spots on our gasterias, some websites say it can be caused from water sitting on their leaves for extended periods.  Again, it's not a plant killer, and as the plant grows, you can gently remove the older/outer leaves that had any spots.

People Love Our Gasterias & Sanseverias! Have a Read:

The last shipment of gasterias & cactus arrived in good condition. I really like the little gasterias & hope to find more of an assortment in the near future! The cactus were healthy & had a good variety!

Arrived in perfect condition, as shown in the picture, even though the FedEx guy threw it at me as soon as I opened the door. Love it. :)

A
A. B.
Greater Little Gasteria

Thanks for everything and the excellent customer service. My gasteria is so cute and came in well-packaged.

Out of all the plants I have I think this one is my favorite. Love the color and it's growing like crazy already! 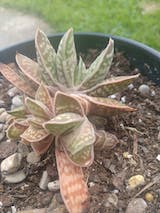